I was sitting recently with a friend who is getting ready to start radiation therapy for breast cancer as she described her first meeting with her radiation oncologists, a young man fresh out of residency.  After he told her that she would receive her treatments laying on a table with her arms spread wide and "bare breasted" -- 45 minutes at a time, 5 days a week for 6 weeks -- she expressed some discomfort with the fact that all the doctors and almost all of the techs in that department are men.  "Oh, don't worry. We're all medical professionals," the young doctor responded.

I don't know exactly how my friend heard that comment, but as I imagined myself in that scene, I heard something like, "We don't look at you as a woman, to us you're just a slab of meat." I can imagine myself in that scene, because as a 60-year-old woman with a family history of breast cancer, it's well within the possibilities of my life that I might end up lying on that table, arms akimbo, breasts exposed to whatever gaze happens by. And frankly, the supposed objectivity of the "medical professional" is cold comfort indeed. What I would really like to do is to walk into that office, find the wet-behind-the-ears doctor and give him a shake by the lapels. I would tell him that if I ever found myself on his table, I would want to be looked at the way he would look at his mother, or sister, or daughter. I want to be seen as a human being in an incredibly vulnerable position, a woman already facing all kinds of invasive treatments and procedures, doubtless frightened and bewildered by this rebellion of her own body against her. Objectivity is the last thing I'd be looking for; please double down on the humanity. I don't want to be a "case" or a treatment plan; I want to be seen and treated as a unique individual.

I've been reflecting on one glimpse into the way Jesus always dealt with people as unique individuals in the story of Peter, the fisherman who gets enlisted to provide a floating pulpit for Jesus when the crowds start pressing in on him.  Peter has spent some time with Jesus before this - his mother in law is healed, Jesus spends the night at his house, Jesus has been hanging around Capernaum for weeks, maybe months.  Peter has heard him preach in the synagogue and teach from the fishing boat. But later that morning, when Jesus urges him to head out to deeper waters and put down his nets, Peter reluctantly agrees. He and his partners have worked all night and caught nothing. There is enough trust for him to listen to the carpenter, but he isn't hoping for much. Then, when the nets are full to breaking and he has to whistle for his friends to come help, Peter is overwhelmed. "Go away from me, Lord, I'm a sinful man."

Peter doesn't have this reaction after witnessing healings and deliverances. He doesn't fall to his knees in response to Jesus' teaching ministry. But here Jesus is speaking Peter's language - the language of fish. He hasn't been presented with a theological proposition or a true-for-all-time demonstration of who Jesus is. He is given a very specific sign in the material of his every day life, and his eyes are opened and his heart convinced that he is in the presence of the Holy.

As the years pass, I find myself growing more and more skeptical of claims to objective truth, to once and for all prescriptions, and five easy steps to whatever. What I crave is the interaction where something unique in me touches the unique in you. It's good to know that someone speaks the language of fish or flowers or soaring architecture. I have experienced God speaking to me through birds and ocean-tossed stones, and once, an overturned table - each one an encounter that touched me deeply, though it may make no sense in the telling. Still, I wonder what's your fish language, and what possibility of life or love might you express in those unique terms. 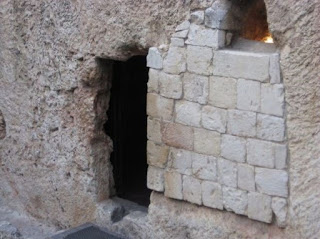